We’re currently on day 3 in Delhi about to check out of our very luxurious hotel which our wonderful friend Ankur kindly arranged for us – it made our transition to India so much more relaxing than we were expecting.

Our first day was a bit of a write off following our flight and arrival, the flight itself was an enjoyable one, we had nice big seats, free drinks and real cutlery – what more can you ask for!

We landed at a foggy Delhi Airport which was less chaotic than we were expecting where we met Ankur,it was great to have someone to meet us there as it took away some of the stress of arriving in a new country.

On our way back from the airport Ankur told us he’d arranged for us to stay at his friend’s 5 star hotel – he failed to mention it was the newly opened Radisson Blu, you can imagine how scruffy we felt walking into the plush reception area!

Our room was fabulous with probably the biggest most comfortable bed we’ve slept in – just what we needed after about 24 hours with no sleep!

The fort was beautiful, a tranquil oasis of calm after the frenetic metro/rickshaw ride to get there – Delhi traffic is a white knuckle experience!

After a couple fo relaxing hours at the fort we headed over to India Gate – again braving a rickshaw – where we discovered that due to Republic Day next week the whole area was closed – hence the lovely barrier in our picture!

The closures also meant our plan o walk to the National Museum was scuppered but we made it there after paying slightly over the odds to get there.

We’ve come to the conclusion that we are not really museum people – the museum was very good and has some spectacular exhibits- but we’ve learned that from now on we’ll visit what we want to see rather than what we think we should see.

So far we’d played it safe with our food but we sampled our first street food near the museum – some delicious vegetable pakoras and bhajis served with a spicy chutney which we polished off in minutes – delicious and only 20rps.

Later that evening we ventured into an area Paharganj which is popular with backpackers, it’s a bit different to the area we’re staying in and probably more like the Delhi we were expecting – colourful, noisy and exciting. We had our first curry of the trip there too – Sharlie had a King fish curry and I had a chicken curry, both were delicious and were washed down with several extra strong Kingfisher’s – served in lovely colourful mugs!

Feeling brave after our beers we headed out to scope out some hotels for our last night in Delhi – our early train meant that, unfortunately, we were not able to stay with Ankur and his family as originally planned – we can’t thank Ankur enough for his kind generosity and his time since we arrived it really has got our trip of to a great start.

Today’s plan is to check into our new hotel and visit the Lotus Temple and Qutub Minab – we’ll let you know how we get on!

More pictures to follow – connection is a bit slow.

After our lovely hotel we came back down to earth with a bump at our new hotel in Paharganj, we stayed at a place called the Kiran Hotel, the steps up to the hotel were steep and the steps to our room were even steeper!

We were based on the 3rd floor and it nearly killed us getting there! The room was a bit of a step down as you can see but it suited our needs and was close to the railway station, restaurants and more importantly beer!

We got to grips with the Metro and took that out to the Lotus Temple which, in Sharlie’s words, was an “oasis of calm”.

We ate at a fantastic roof top restaurant accompanied with strong Kingfisher beer – served in a mug of course we also found a bar while we were out and it was a bit different to what we’re used to to say the least! The male presence was quite overwhelming and we weren’t too comfortable there to be honest.

It’s been unseasonably cold in India and we’ve been pretty chilly in the evenings, we’ve only brought 1 fleece each so we’ve had to wear them everyday.

The fog in the mornings has been causing problems with travel, several flights have been cancelled and we were concerned our train to Agra might be affected, which it was!

The Metro is amazing – not sure how we would have got around without it – was especially fun getting off the busier stations where we had to wrestle ourselves off!

It’s certainly chaotic and manic to the untrained eye but once you’ve adapted you can appreciate how much is going everywhere you look, we didn’t even mind the smell ! 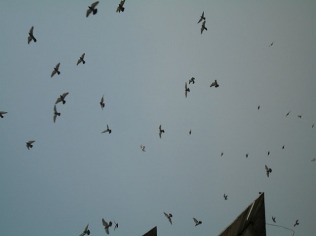 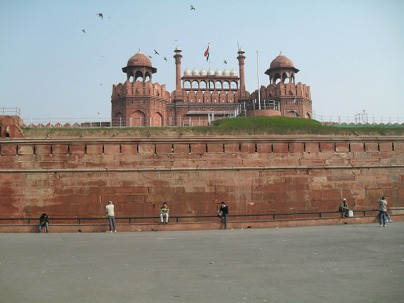 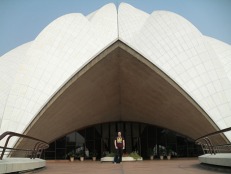